What is a Pressure Sensitive Tape?

The Pressure Sensitive Tape Council (PSTC) defines Pressure Sensitive Tape as a continuous flexible strip of cloth, paper, metal or plastic coated on one or both sides with a permanently tacky adhesive at room temperature which will adhere to a variety of surfaces with light pressure (finger pressure) with no phase change (liquid to solid) and usually on a roll. The key point that differentiates a pressure sensitive tape from other types of adhesives is that no activation by water, solvent, or heat is necessary to exert a strong adhesive force towards diverse materials such as paper, glass, wood, plastic, or metal.

PRESSURE-SENSITIVE ADHESIVES  - polymeric materials in an elastomeric state of matter that have significant time and temperature dependencies (viscoelasticity). They are inherently tacky and have peel and load bearing properties.

POLYMER - a large molecule consisting of many (poly) atoms linked in a repeating, chainlike fashion (macromolecule).

VISCOELASTICITY - refers to the state of having the characteristics of both a liquid and a solid.

The Elements of a Pressure Sensitive Adhesive

Pressure sensitive adhesives function as a result of three separate properties: Adhesion, Cohesion, and Tack. These three features balance one another, meaning that it is impossible to have a tape with 100% of each.

COHESION - inner strength of the adhesive

The Five Factors of Adhesion - T.A.P.E.S. 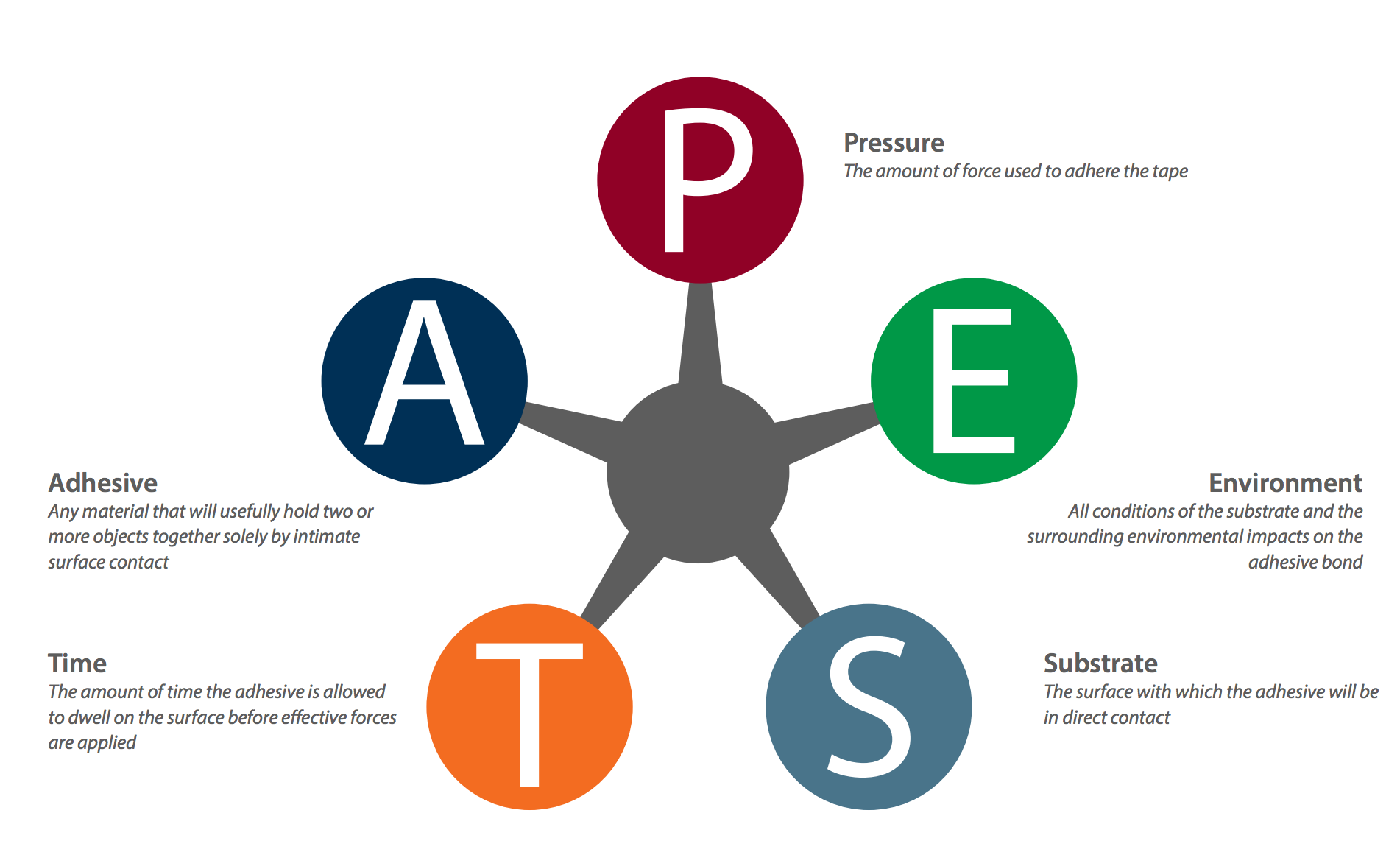 COMPONENTS AND FORMATS OF TAPE

When breaking tape down into its components, you are given three categories, the ADHESIVE, the CARRIER (or backing), and the RELEASE LINER. Not all tapes will feature all the components.

There are also three standard formats of tape, the ADHESIVE TRANSFER, the SINGLE COATED tape (or label stock), and the DOUBLE COATED tape.

ADHESIVE TRANSFERS consist of a release liner carrying an unsupported adhesive. The release liner is commonly a paper that has been coated on both sides with a silicone release agent. Adhesive transfers are often an acrylic adhesive but can be made from any adhesive. Examples of adhesive transfers include tapes for envelope or bag sealing, graphic attachment, and splicing.

SINGLE COATED tapes feature an adhesive applied to only one side of a carrier/backing. The carrier may be almost any flexible material, including paper, polymeric film, foil, nonwoven or high thread count woven cloth. The construction of single coated tapes typically has a backing most often 1-10mils thick and an adhesive thickness of 2-5 mils - though there are exceptions. The tape may be self-wound with a release coating applied to the backing, or it can be lined with a paper or film release liner. Some single-coated tapes, such as filament tape and duct tape, also feature reinforcements of woven cloth or glass strands and typically are paired with rubber based adhesive systems. Examples of single coated tapes are electrical tape, masking tape, carton sealing tape and most medical tapes.

DOUBLE COATED tapes are created when an adhesive is coated on both sides of a carrier material. The tape is then wound with a release liner, commonly paper that has been coated on both sides with a silicone release agent. The carrier is typically a polymeric film, and the adhesive (acrylic, rubber, or silicone) may be the same or different on either side of the carrier, as well as offering different coating thicknesses. Some examples of double coated tapes are bonding and mounting tapes and membranes.

RUBBER adhesive systems are typically used for indoor applications with low-stress requirements. They commonly adhere well to low surface energy substrates and can be formulated for excellent removability. Rubber adhesives are often found on masking tapes, carton sealing tapes, duct tapes, and filament tapes. Rubber adhesives are not tacky by nature, so it is necessary to add tackifier resins to create the adhesive.

There are two main categories of rubber adhesives:

NATURAL RUBBER - These adhesives have a high molecular weight with long polymer chains. They typically adhere to LSE substrates and exhibit clean removability and good shear, but poor temperature resistance and aging properties.

ACRYLIC adhesive systems are typically used for either indoor or outdoor application with more critical permanent long-term bonding requirements. Although acrylic adhesives are tacky by nature, often a tackifier is added to enhance its quick-stick properties. This is a benefit of acrylic adhesives - their polymers can be precisely adjusted during their industrial manufacturing process to improve the overall performance of the adhesive.

There are two main categories of acrylic adhesives:

SOLVENT ACRYLIC - These adhesives get their name because their polymer grains dissolve in a solvent. Typically these adhesives do not adhere well to LSE substrates but do exhibit better property retention than rubber under many circumstances.

EMULSION ACRYLIC - These water-based adhesives consist of spherical particles surrounded by a SURFACTANT in a water carrier. They are usually less expensive and more environmentally friendly than solvent acrylic adhesives, but due to the water-based properties, they do not offer good moisture resistance, leading to solvent acrylics being preferred for critical applications.

SILICONE adhesives are the most expensive adhesive. They exhibit a very high-temperature resistance and can handle extreme environmental conditions. Despite their bonding strength, often silicone adhesives are incorrectly perceived to have very low sticking power due to their low initial bond strength.

Tapes with silicone adhesive systems are typically used for critical applications where the tapes are exposed to extremely high temperatures and harsh environments or are adhering to other siliconized surfaces, as the best thing to adhere permanently to silicone is silicone.

Want to know more?  Check out our other features and guides for selecting the right adhesive tape, or download our free eBook!